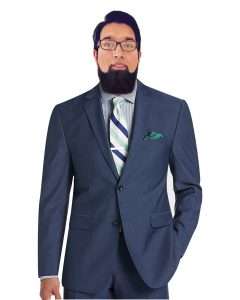 Our Chief Executive  Abdul Hafeez Siddique is an experienced, qualified Muslim Chaplain who studied at a traditional Islamic seminary in Bolton. He graduated from the seminary at the age of 17 making him, at the point of qualification, one of the youngest Imam’s in Britain.  Post qualification,  Abdul serves as a Muslim Chaplain at HMP Wymott where he works as part of a multi-disciplinary,  multi-faith team.

Abdul has a strong academic background in community cohesion and social capital research. After completing his undergraduate degree in this field, he was awarded a postgraduate scholarship by the Mariott Trust. Subsequently this  led him to become the first person in the Northwest to look in to how members of the South-Asian Muslim community in Bolton interpreted the terminology and lexicology surrounding community cohesion. He asked these difficult questions to marginalised members of the bamer community. The research allowed Abdul to undertake an in-depth theoretical study of the evolution of the concept: community cohesion and his in-depth qualitative interviews formed the basis of his study that was supervised by Professor Carole Truman and Dr Margaret Boneham at the University of Bolton. This seminal study came to fruition in the form of a thesis submitted for the degree of Master of Philosophy (M.Phil) titled ‘A critical analysis of Cantle’s (2001) community cohesion model and its applicability to marginalised elements of Bolton’s south-asian Muslim Community’ that was awarded to him in 2011. In addition, Abdul has over 10 years experience working with socially excluded immigrant BAME communities and their representatives in Bolton to promote community cohesion and build social capital.

In 2012 Abdul Undertook an MA in social work at The University of Manchester to further solidify his theoretical and practical knowledge, to be the voice of marginalised diasporas, work effectively to alleviate social issues and promote community cohesion.

He is a fellow of the Institute of Leadership and Management, having completed their intensive leadership development programme.

Passionate about bringing those at the margins of our society to the centre; he has served as vice-chair of  Lancashire Equality Organisation since 2017  overseeing the groups community cohesion based collaborations and strategic partnerships across the county.

Abdul believes in the power of transformative education to improve community relations and integration. To this end he founded The Flowhesion Academies Trust in 2019, working with a world class educational leadership team to deliver quality primary and secondary education services to young people across the UK.

More recently he was appointed as a non-executive director at Bridgewater community Healthcare NHS Foundation Trust overseeing the organisation’s  engagement and inclusion portfolio.